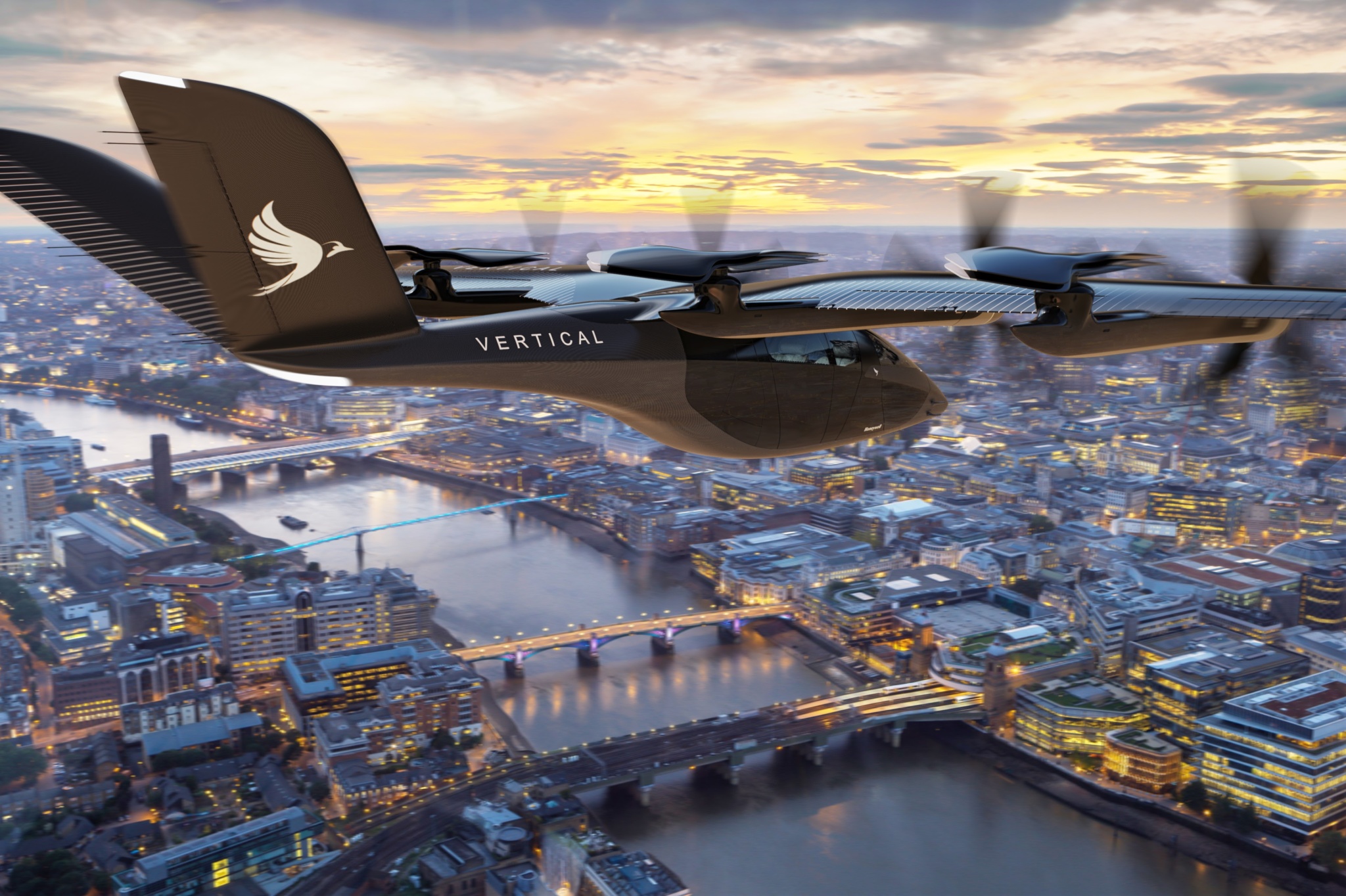 As the issue of climate change becomes an increasingly pressing force, the calls for innovative solutions to decarbonise the transport sector are growing louder. And the UK government’s recently updated emissions target (a 78 per cent reduction by 2035) has amplified this push.

Bristol-based Vertical Aerospace is one company that plans to bring these much-demanded solutions to the forefront, through the development of an electrically powered piloted vertical take-off and landing aircraft (eVTOL) that could be carrying passengers as soon as 2024.

The company’s mission is “in some respects very simple: to make green zero-carbon Urban Air Mobility (UAM) a reality, and to be the first to do so,”said Mike Gascoyne, CTO at Vertical Aerospace and former Formula 1 engineer for teams including McLaren, Sauber, Jordan, Tyrell and Renault. “It’s kind of the holy grail of the aerospace industry at the moment, a lot of people are talking about it — autonomous vehicles, vehicles able to fly in inner cities, carbon-free, low noise… but it comes with a huge amount of technical challenges given current technology.”

It’s these very technical challenges that Gascoyne believes Vertical is well equipped to address, thanks to the expertise of its team and industry partners and, particularly, the management team’s background in motorsport. Both Gascoyne and the company’s founder Stephen Fitzpatrick — also founder of clean energy group OVO — came to Vertical from the world of F1.

Prior to the formation of Vertical, Gascoyne had set up his own consultancy, MGI Motorsport, after around 30 years with F1, aiming to bring the same standards of technology and lightweight composite structural engineering to the mainstream.

“F1 has put a huge amount of money into solving technical problems that are very relevant in every other area, but they’ve been able to invest far more money than perhaps commercial organisations could do,” Gascoyne said. With MGI, the goal was to bring that knowledge to mainstream and aerospace engineering in a more affordable way, without all of the development costs.

Fitzpatrick approached Gascoyne to work together and bought MGI, now Vertical Advanced Engineering, a deal that Gascoyne described as easy to do. “Working with Stephen was very attractive, he’s a very dynamic guy in what he wanted to do with Vertical and green engineering, and what he’s doing with OVO and carbon-free energy is a very relevant thing, very aligned with my own views,” said Gascoyne. “What he wanted to do in engineering terms, to bring to Vertical, was exactly what we wanted to bring to companies like Vertical, so it was a very easy fit.”

Commenting on the challenges that can be solved through application of motorsport engineering knowledge, Gascoyne said that one major obstacle in developing a certifiable eVTOL is the limitation around battery weight. “Unlike any conventionally fuelled vehicle you don’t burn off any fuel, you carry those batteries the whole time so your aircraft doesn’t get any lighter,” Gascoyne said. “The batteries are what they are, the people and the payload is what it is, so you’ve got to take the weight out of smaller parts of the aircraft and I think utilising the F1 skills in lightweight structural design is absolutely key.

“Formula 1 cars are a sort of masterpiece of engineering packaging, and although yes, you have big internal combustion engines, you’ve also got vehicle hybrid power, battery power, energy recovery, very complex electronic management systems for all the systems on the car.

“Those are exactly the problems you’re solving on the aircraft: lightweight structural solutions, packaging and powertrains, cooling of power trains, flight control systems, HV systems, battery integration … Formula 1 is based on very small gains so every advantage you can get is taken, and that’s what you have to do at the moment to make eVTOLs work, the synergies are very great.”

Vertical’s current eVTOL project, the VA-X4, will be a piloted eight-rotor lifting aircraft including four front tilt rotors. Set to be able to fly at speeds over 150mph with a 100m range initially, it has been designed for near-silent flight in multiple applications and will carry up to four passengers.

With design stages now moving into early production, the aim is to fly a technology demonstrator prototype in the final quarter of 2021. “This is a novel aircraft, so there’s a huge amount of learning to do as we build and commission it,” Gascoyne said. “It’s a huge challenge, but we’re still on target to fly it in ’21.”

The team hopes that the VA-X4 will be one of the very first commercial zero carbon aircraft to carry passengers, with an aim of becoming fully certified by the CAA and EASA, ready for initial commercial services in 2024. This, Gascoyne believes, is an area where Vertical can really stand out from the competition.

“There’s a lot of people in the sector talking about designing and making aircraft, but there’s very few who have realistic plans to not just design and make an aircraft and fly it initially, but to turn that into a certifiable aircraft that you can make in large numbers and is commercially viable,” he said. “There’s very few people in the sector that have a credible route to that and we feel that’s a real strength of our company.”

Two of Vertical’s prototypes have already been flown — the VA-X1, a quad copter which was granted flight permission by the CAA in 2018, and the VA-X2, a multi-rotored aircraft described as a ‘good step forward in capability’ by Gascoyne. The VA-X4, he added, is a ‘huge step up’ from the previous vehicles in terms of its complexity and capabilities.

Partners with high standards of expertise will be key to upgrading the VA-X4 and taking it from its prototype stage to a fully certifiable aircraft at a commercially viable position, Gascoyne said. Earlier this year, the company announced a partnership with aerospace and defence giant Rolls-Royce. The collaboration was announced to be the first commercial deal in the UAM market for Rolls, which is aiming to develop sustainable tech for aviation, marine and industrial applications.

Rolls-Royce’s role will be to develop the electrical power system for the certified version of the aircraft, which will be based on the demonstrator planned for flight this year. “The first version will fly with more off-the-shelf type equipment, but Rolls-Royce will be key in replacing the powertrain with something suitable for a certified aircraft which will need to be much lighter weight and higher performance,” said Gascoyne.

Other major partners involved in the development of the VA-X4 include aerospace and architectural engineering firm Honeywell, which is working on the flight control system, and materials specialists Solvay, who will supply composite materials.

According to Gascoyne, statistics show that the eVTOL will have airliner type levels of reliability, be ‘100 times safer than a helicopter’ and ’30 to 50 times’ less loud — allowing the vehicle to safely fly over urban airspace and take off and land in confined spaces in addition to being carbon-free. “Its advantages when you can make it safe are huge,” he said.

Whilst Vertical is charging ahead to get the aircraft in service by its target of 2024/25, there are a number of related steps that will need to be taken to support the integration of UAM as a viable sustainable mode of transport, not least building up the infrastructure, said Gascoyne.

“Of course you can fly out of conventional airports but that’s not really what it’s here to do, it’s there to transport you from the places you can’t currently fly from and get quickly and conveniently into places where it’d be hours by road and even more hours if you got a local flight.”

With UK Research and Innovation set to pump £125m into its Future Flight Challenge in support of sustainable air travel, and Urban Air Port’s ‘Air-One’ –  planned to be the world’s first airport for eVTOLs – announced as a winner of the funding, it seems that UAM is no longer the futuristic, abstract concept it once was. And  Vertical Aerospace, Bristol’s ambitious new aviation pioneer, is well placed to play a starring role in this emerging sector.